If you make a purchase through an affiliate link, I may earn a small commission at no extra cost to you.

However, the Brother CS7000i sewing machine is an update to its well-loved predecessor.

Now, let me give you a tour of this new CS7000i sewing machine and let you know what to expect if you decide to purchase one for yourself. 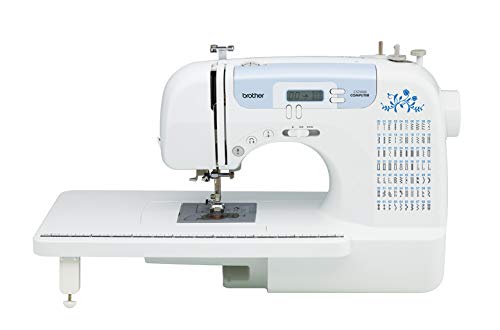 What Comes With the Brother CS7000i?

Here’s what will come in the box if you decide to purchase the Brother CS7000i sewing machine.

Almost everything you need to get started is included with the exception of fabric and thread!  If you’re wanting to purchase additional bobbins, you can pick up extra size 15, SA156 Brother bobbins.  These are 7/16″ plastic bobbins.  (I had a snafu once using non-Brother brand bobbins, so I recommend the Brother name wholeheartedly!)  I like to keep a small army of bobbins I’ve prethreaded around me, which is a big timesaver if I run out in the middle of a project.

I’ve also written a post about some of my favorite sewing tools.  My sewing corner is filled with more goodies than you could ever imagine.  I took pictures of all of them to show you what they are and what they’re used for.  So check that out if you’re looking to expand your sewing corner, too!

What can you sew with the stitches?

As I mentioned before, there are 70 stitches included on the Brother CS7000i sewing machine, which is 10 more than the CS6000i.  The extra 10 stitches not included in the Brother CS6000i’s stitches are mostly decorative and satin stitches.

With the Brother CS7000i, you’re getting 7 buttonholes and other utility, decorative, heirloom, and quilting stitches.  I love the piecing stitch, which allows 1/4″ seams with your zigzag foot.

Which presser feet are included with the Brother CS7000i sewing machine?

The Brother CS7000i sewing machine includes 10 presser feet, one more than the 9 with the Brother CS6000i.   The additional foot is the 1/4″ piecing foot.  Here are the presser feet and what you can sew with them:

What are the perks of a computerized sewing machine?

Because the Brother CS7000i is computerized, you’re going to get a lot more options with it than with a basic, mechanical sewing machine like the Brother XR3774 or GX37.

For instance, an LCD screen with buttons controls stitch selection and stitch length and width.  Once you’ve selected the stitch, a letter with a presser foot picture appears on the screen.  This reminds the user which presser foot will work best with the selected stitch.

If you make a lot of beginner mistakes and have difficulty troubleshooting (this was definitely me many years ago!), the screen also displays error messages that will give more detailed information on how to fix your machine when problems arise.

Any other fun features?

In addition to everything listed above, the Brother CS7000i computerized sewing and quilting machine has a few more cool abilities.

Like other Brother sewing machines, the Brother CS7000i features a built-in free arm.  This is the smaller arm that remains when the accessories compartment is removed.  It will help sewing small, tubular items like pants hems or shirt cuffs.

A dual-LED light illuminates your workspace.  It’s helpful when sewing dark fabrics or for those users who don’t have as good of near vision as they used to!  Some users complain about light quality, but here’s a picture below of my light in action in my room.  I find it more than adequate!

The lightweight size of the Brother CS7000i sewing machine also makes it very portable.  The included hard case will also protect it in transit or from collecting dust while sitting on your sewing table.

See, here’s an example of the instructions to set the bobbin.

Threading the needle is easy, too.  Follow the instructions on the machine, passing the thread through the tension discs and thread guides until you reach the needle.  (Make sure to thread with the presser foot up or you might end up with tension adjustment issues!)  An automatic needle threader makes threading the needle easier in theory.  It’s a little finicky, though, but is a nice help for sewists with poor eyesight or issues with shaky hands.

If you’re new to sewing, check out my guide to choosing a sewing machine needle to get a printable to keep next to your sewing machine.

These simple features along with ease of use make the Brother CS7000i sewing machine great for beginners!

Does the Brother CS7000i monogram, embroider, or act like a serger?

No, the Brother CS7000i does not have a built-in font for monogramming, nor does it have embroidery capabilities to allow design importing.  I know, that’s a bit confusing seeing as it says it comes with a monogramming foot.  However, that’s just the presser foot that you’ll use with the included decorative stitches.  If you’re looking for a sewing machine that has a monogramming font, I recommend the Brother HC1850 sewing machine (see: Brother HC1850 review).

Not all hope is lost, though.  You can still do free-motion embroidery, which is pretty cool!  Of course, you can also applique with the Brother CS7000i.

In terms of acting like a serger, the Brother CS7000i does have an overcasting stitch and presser foot to create a seam and finish fabric edges at once.  However, you cannot trim edges with the Brother CS7000i as a serger would.  It’s also nowhere near as fast or as accurate.

There is an accessory presser foot you can purchase separately called the Brother side cutter foot.  It will trim fabric while sewing, which sounds AMAZING.  I own one and have found it to be good, not great, especially with stretchy fabrics.  This is no replacement for the professional seams a serger can make but can definitely function as a “poor man’s serger.”  As such, I regularly use it.  Read more in my Brother side cutter foot review and tutorial if your interest is piqued!

Can the Brother CS7000i sew thick fabrics like denim or leather?

However, occasional thick fabrics are fair game.  I’ve stretched the limits of my machine many times.  (I’m of the “you never know if you don’t try” mentality!)  I’ve found that picking the correct needle type and thread weight as well as sewing slowly and using the handwheel if needed will allow for sewing of very thick fabrics.  I routinely sew 2-3 layers of denim, and I recently repurposed a men’s fleece jacket into a doll sleeping bag, during which I was very impressed at the versatility of my machine.

Yes, the Brother CS7000is a combination sewing and quilting machine, so it’s going to be more geared towards quilters than other basic sewing machines.

The included oversized, wide table is detachable and useful for holding larger projects.  I regularly use my table when sewing clothes, costumes, and other DIY projects besides quilts.

The 6-point feed dogs also drop without needing to cover them with a darning plate.  A huge plus in my book!

What’s Not So Great About the Brother CS7000i?

When comparing the Brother CS7000i vs CS6000i, only a small handful of differences exist.  The two sewing machines are of identical sizes and shapes and have identical setup and use.  However, the color scheme is different, and the number of stitches has increased from 60 to 70.  Brother has also added one extra presser foot, the 1/4″ piecing foot.

The Brother CS6000i has been a faithful companion to me all these years, and I’m glad it’s getting a facelift so it can continue to work alongside sewists.

In comparing the Brother CS7000i vs Brother CS7000X, the new Brother CS7000X features an updated, boxier look and an improved automatic needle threader with more plastic and less bendable metal.  The 70 stitches are identical between the two machines, although the order of stitches 57-69 varies between the two.  The same presser feet are included also, and setup and use are almost identical.  The CS7000X, however, stitches at 100 spm less and weighs less.

As you can see from the Brother CS7000i review, it’s a great quality machine that beginners will find easy to use.  Advanced sewists will also enjoy its versatility due to the various stitches and presser feet options.  While it’s an upgrade to the Brother CS6000i, just make sure the few extra features are really worth the money for you!

This site uses Akismet to reduce spam. Learn how your comment data is processed.

Hi! I'm Aly! I'm a mom of two girls and a very part-time eye doctor married to another eye doctor. I love spending my free time sewing, embroidering, and reading.